Zantac lawsuits are now consolidated in a class-action federal court in Florida. So if you file a Zantac claim in federal court, your lawsuit will wind up in Florida.  According to the federal Food and Drug Administration (FDA), tests have shown levels of the chemical N-Nitrosodimethylamine (NDMA). Sanofi, the maker of Zantac, subsequently recalled the drug in the US and Canada. If not for NDMA, Zantac would still be for sale and the threat of litigation wouldn’t exist. What is NDMA and why does it raise so much concern Sanofi would pull a billion dollar drug off the market? 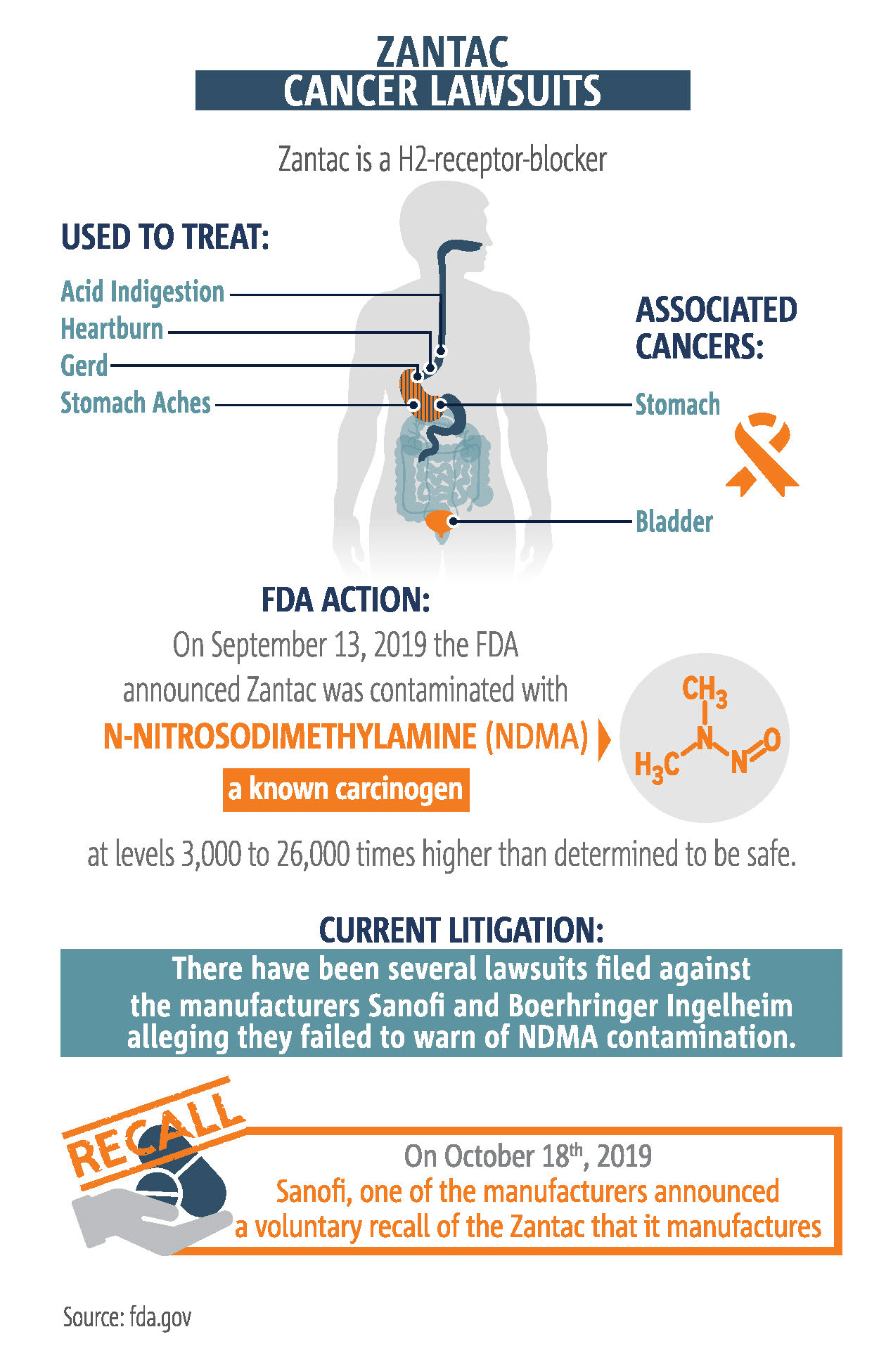 A dangerous chemical, but how dangerous is unknown

NDMA is a semivolatile organic chemical (it’s composed of compounds with broad chemical properties and structural features) that forms in both industrial and natural processes, according to the federal Environmental Protection Agency (EPA).

Ingesting the chemical, including consumption of contaminated food, water and medications, is the primary way people are exposed to NDMA. If at high levels liver damage can result. Possible symptoms of exposure to dangerous levels of NDMA include headache, fever, nausea, jaundice, vomiting, abdominal cramps, enlarged liver, reduced organ function (liver, kidneys and lungs) and dizziness.

Different agencies and groups have also stated NDMA can probably cause cancer.

NDMA is not produced in a pure form nor is it commercially used in the US, except for research.  It’s been used in the past in the production of liquid rocket fuel, antioxidants and additives for lubricants.

The chemical is also in the news because it was found in the high blood pressure and heart failure medication valsartan. The FDA has reduced its approved use of the drug as a result, stating it should be used only if other medications cannot. In this case the NDMA is believed to be an accidental byproduct of the industrial process used to make the drug.

Sanofi may have a much bigger problem than finding out how to make Zantac differently so NDMA won’t be present. According to one lab, the drug’s active ingredient, ranitidine, is “fundamentally unstable” and the NDMA may be produced in patients’ bodies after the drug is ingested, according to CBS News. At a lab owned by Valisure drugs from its online pharmacy were tested to check their purity and quality. The over the counter version of Zantac had such high levels of NDMA it notified the FDA of the problem.

Valisure CEO David Light states Zantac, under lab conditions and in the human body, can form NDMA. This relationship between ranitidine and NDMA first appeared three years ago in published research. During a study ten volunteers were given Zantac tablets. Their urine was tested afterward and NDMA levels more than 400 times greater than what the FDA considers acceptable were discovered.

How ZeroRisk Cases, LLC can help grow your practice

If your firm is currently involved in litigation representing Zantac users who have developed, or may develop, cancer, or you believe your firm may consider taking these cases in the future, contact us today so we can discuss how you can attract potential clients through our lead generation program. We can match you with Zantac users who match the criteria you provide, not just tell you about the number of clicks on a web page. Call us at 833-ZERORISK (833-937-6747) so we can discuss what we can do for you and your practice.

Article Name
Zantac Lawsuit-NDMA and Cancer
Description
If your firm is currently involved in litigation representing Zantac users who have developed, or may develop, cancer, or you believe your firm may consider taking these cases in the future, contact us today so we can discuss how you can attract potential clients through our lead generation program.
Author
Edward Lott, Ph.D., M.B.A.
Publisher Name
ZeroRisk Cases, LLC
Publisher Logo